About 8 years ago I met a dashingly handsome pit bull/boxer mix named Bubba. He hailed from North Carolina but his bark lacked any accent. He was born into poor dixie trash with his puppyhood spoiled by untold tales of abuse & neglect. Bubba found a new owner when he was about 21, someone he could trust and who would never let him go. He was a wonderfully behaved pooch, loyal, gentle and occasionally a little gassy.

Still, they were best friends, like Ponyboy & Johnny, R2D2 & C3PO, Kevin & Paul, Over time their living arrangement eventually blossomed into love. In their own little world of tugtoys, bellyrubs and outdoor defecation, they were everything to each other. They went on daily walks together, numerous car rides and many backyard excursions.

About a year ago, Maxine succumbed to old age. She lived a vibrant life but time caught up with her. Bubba was rendered desolate. He walked around his owners house for weeks trying to find her. Beneath the fur, he knew she was gone, but didn't want to admit it. At feeding time, he still gave leeway for Maxine to dine first, sitting back until his owner gave the OK. Bubba lost his appetite for everything he once enjoyed and the will to carry on alone. 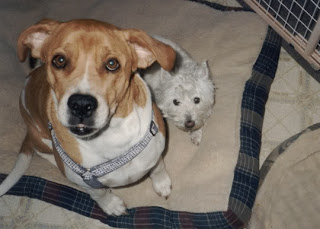 Bubba passed away last week at the age of 84. He never fully recovered from the loss of his soulmate - fuck...does anybody? If there is a canine afterlife, may he be reunited with that one individual who completes him. May his eternal days be abundant with dead carcasses to roll in, leggy bitches to mount and all the shit he can eat.
Posted by foodedge