So I was walking around my neighborhood this morning. A peaceful Mother's Day stroll while residents were waking up, calling their loved ones or doing yardwork. Keeping to myself, humming Elmore James tunes, I noticed a handbill laying on the sidewalk. Hmmm...this wasn't really the type of area where trash is strewn about much, so I was interested in it's content. 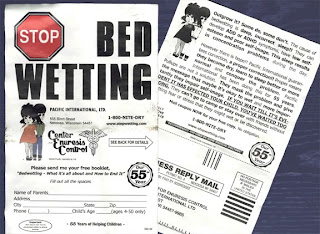 Is this really such an extensive epidemic that it needs to be addresses via streetwise propaganda? I mean, shit, everyone pisses. My one buddies' girlfriend leaks in her pants all the time, that doesn't mean she should send away for some informative pamphlet and sleep on the bathroom floor.

Apparently our good friends at Pacific International LTD, which is located nowhere near the Pacific Ocean, have taken it upon themselves to dry up America with their tried-and-true treatments of tyranny. Why must everyone follow their pissing protocol? We live in the greatest country in the world. Sure we're marred with racial inequality, political corruption on every level and freekin' Nascar, but we also have freedom of facial hair, Night Court in syndication and drive thru porno shops. I say if chicks wanna keep pissing themselves, that's cool with me. According to this flyer, bed wetting is caused by "incorrect sleep," which makes about as much sense as tit-flashing Stevie Wonder, but with over half a century of experience, I assume these pee pee professionals would hold some merit.

There's nothing sexier than when a hot chick lets loose a lemonade load on her deserving dude. Yeah, that's what I'm talking about. These dry-jockied jerkbags are trying to desensitize the youth of today and steer children onto a path of the prosaic. I still remember as if it was yesterday, the first time I crossed the streams with a chick before. It was beyond cool. And ya know why, because my parents raised me right and showed lil' Smith the benefits of using toilets and urinals but also gave me the freedom of enuresis expression. As I celebrate Mother's Day by drinking an army of Pabst pounders, every time I urinate, it'll be like I'm hugging my mom and saying "Thanks."
Posted by foodedge