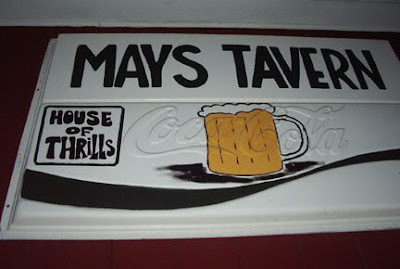 review one:  If JFK would have lost the 1960 presidential election, then THIS BAR would be just like the movie The Deer Hunter. We, as a country, could have very well avoided our involvement in Vietnam. Over 58,000 American lives could have been spared and conjointly, maybe the Deer Hunter could have spend more time being about Buck Season! Deer Hunters are cool. I hope my next wife has her deer license so she can go kill dinner for me. That would be so romantic. And she’d give me the pelt so I could curl up in front of the fireplace as a read Napoleon Hill. And Mays Tavern is where I will hang out. I don’t wanna give away TOO MUCH about this gem, (i.e. GO THERE!) but lets just say the sign outside is irrefutable.
review two:  Growing up, there was a kid who, according to his family tradition, was to have sex with the first doe he killed. Yup…dude rod into deer box. And he did. For real. He lives in western New York now, but I think he would like Mays Tavern. He just bought some land up there.
Rating: 4/5
Kramers
820 East Avenue 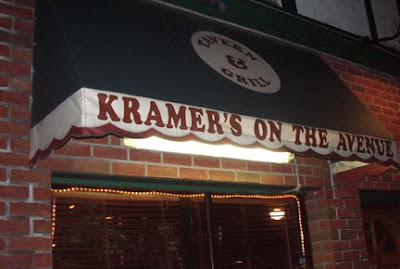 We sat at the bar. There was a dead fly on the mustard bottle in front of us. We joked about it. Sometimes it’s not what you’re laughing about, it’s who you’re laughing with. This place was weak. I find no reason to revisit. As we got off our stools to leave, the fly moved over to a pepper shaker.  True story. 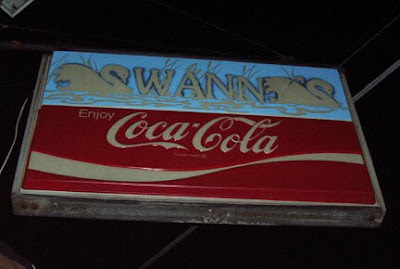 Not sure if you noticed, but I’ve been navigating off-topic lately. Most of these bars are what you’d expect. Shitty, boring and uneventful. Crappy budweiser on draft and a bawdy bitch sitting on her plump asspillow playing Megatouch. But still powerfully better than any bar in downtown Erie (sans Club Power Moves!) The night we visited Swann’s, it was my associates turn to drive. So I got drunk. Real drunk. I don’t remember much. I should probably go there again, if I knew where it was. I slept good that night. As if I was watching my kid in a grade school play. 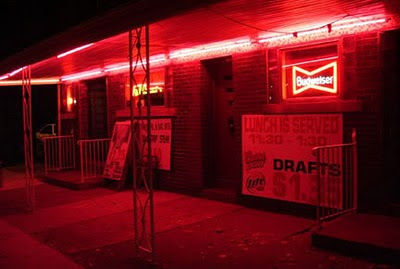 Yeah, same night. I remember there was a giant stuffed gorilla sitting at a table. And some beastly lady with a bag of her soiled jeans. Probably shit stained. Pig… And I tried to get Whiteman to get us some swiss cheese and some pickled sausage. I don’t remember her name? At least I’m a fun drunk… 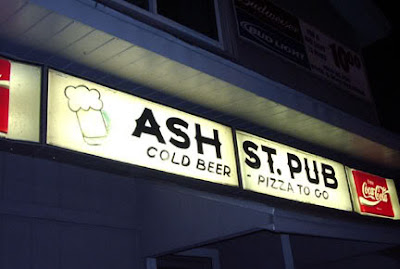 Yeah, dawg! Le’ bartender was some classic rock renegade who’ll talk your freekin’ ear off, man. His drunken drivel made about as much sense as licking a raccoon’s paw. I liked this place. More bartenders should drink. Ron Popeil always tries the shit he’s selling! 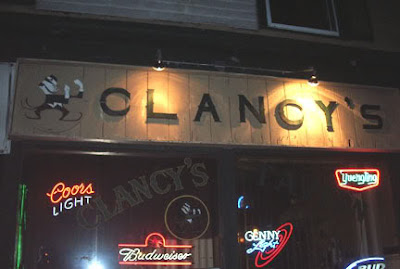 This East Ave. stop was nice. Not like “dude, you should buy this place” but a pleasing predilection of sorts. They had live music (some hoary hero with an acousitc geetar playing Paul Simon ‘n shit) and the joint did NOT smell like the inside of a retards thigh. This is the kind of place where you could make out with a chick and NOT worry about her moustache giving you face abrasion. And chances are she probably has enough money left over to take the bus downtown on Monday morning to get that abortion! Next time you go on a date with some broad, maybe stop here on your way to Rapeland Farms! 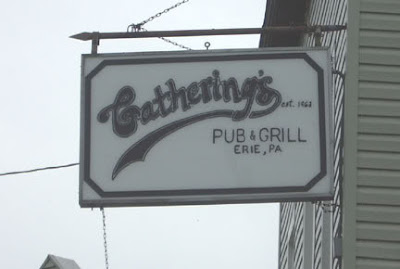 Collin Marple was my favorite roommate ever. Nothing against any of the other dudes and chicks who had the severe torture to share quarters with me, but Collin woke up early. We’d have coffee every morning outside on the couch of 319. His girlfriend at the time, who had gravity-defying boobs, would crawl to her car and we’d heckle her as she drove away. He would say the funniest shit and refer to every dirtbag, idiot and fool as “your boy.” He had this omnipotence over all things hip hop but was well versed in punk and metal, moreso than 99% of the people I know. Dude had Grim Reapers’ “See You In Hell” on vinyl! Wanting to hear the title track, and more notably, Steve Grimmett’s 18 second falsetto flair at the end of the track, Collin wisened me to a wider world. He dragged the needle to song 3 on side 1, “Liar.”

Southpaw axeman Nick Bowcott crunches thru a killer riff showcase as Grimmett’s vocals soar overhead like a flesh-obsessed vulture. You’re lucky I don’t remember the names of the rhythm section, or I’d talk about them too! This is one of my favorite songs ever, probably because I was introduced to it in such a chivalrous and fun fashion.

Anyway, Gatherings is NOT a dive bar. My associate lied to me…LIAR!

Rating: 1/5 This place is way too nice 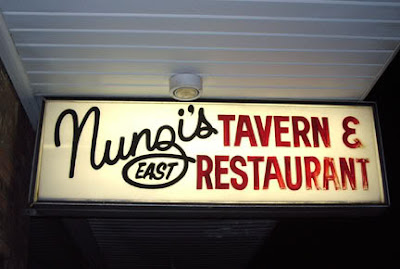 Isn’t a Nunzi one of those things that chicks wear? I dunno. I found $10 on the floor. This place would be a good place for a mother rat to lay her eggs. I think this is the first bar we simply walked out on. As we approached the sidewalk a sign proudly proclaimed MC DJ was spinning all your favorite crappy modern hits. Now I have seen AC/DC live. Critty was there with me. My neck hasn’t been the same since. (Hence the earlier reference to the Red chiropractor) Have you ever seen a show that was SOOOO loud that you could actually see the soundwaves? For real. It looks kinda blurry. Like visual vibration. You feel really exposed, like a wolf could come up behind you and take the sharpie right out of your back pocket. Well, Jimmy’s was loud as piss, blasting some horrible rap sewage. The place was crowded, but there was no bartender. We waited for about 4 minutes, assaulted by the abhorrent sounds of Kid Rock, before we left. Up yours Jimmy…and the bat that you ate off that tree!
Rating: blah! 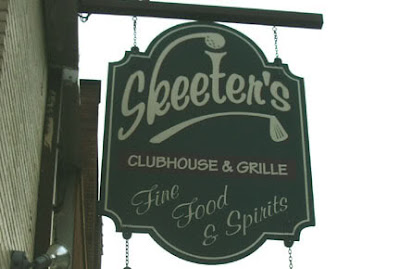 If Lloyd Dobler was 21, he should have went here after her broke up with Diane Court. Absolutely NO chicks go here. Looking into the future, the following conversation will take place between me and my supermodel viking wife.

Wife: where are you going? You can’t just bang it out and then leave!
Me: Why not, I finished!
Wife: Not so fast mister, I don’t want you staying out all night, coming home, smelling like perfume!
Me: (with arms outstretched) But babes, I’m going to Skeeters!
Wife: (smiling) Ok, have fun. Don’t forget, tomorrow me and a buttload of my hot friends are gonna be re-enacting the battle scene from Braveheart in the backyard…topless.
Me: Ehh…I might be busy (closes door) 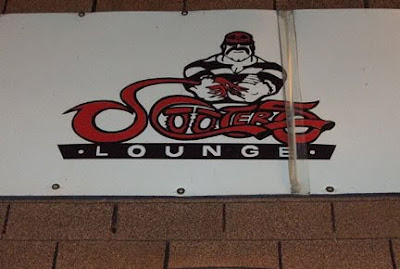 Remember in Back to the Future II when Marty is in the alternate 1985 and the entire town of Hill Valley is a biker haven rats nest? Yeah! We pulled up to Scooters (in a four wheeled vehicle…our first mistake) and were blinded by about 30 bikes and their respective riders. With more leather than Rob Halford’s closet, these dudes looked quite formidable. The inside of the bar was an entirely different story, maybe 10 people total, most of them saggy-tittied biker bitches. This place was rough, but I kinda looked the part, so we were in. When they make a movie of the life and career of Sam Elliott, THIS is the location in the film where he loses his virginity. They sell do-rags too. I almost bought one. I opted for a another beer instead.  Ehhh..it’s like a homo going to a titty bar. 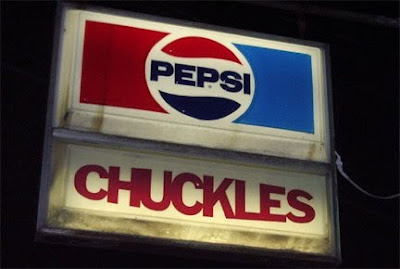 Individuals fail all the time. The teenage girl that dresses like a hussie for 3 days straight, hoping that one boy will take notice and ask her to the Enchantment Under the Sea dance on Friday. The youngling who wants to build a treehouse super bad in his back yard, but lacks lumber…or any sense of architecture…or friends for that matter. The avid record collector who drives 126 miles to a swap meet, following a lead of first pressing John Coltrane vinyl, only to find a bin full of Steve Lawrence records. Sometimes effort goes unnoticed, sometimes direction just isn’t enough. Chuckles Tavern sits in a shitty location and therein lies the problem. Comparative to size as a hollowed out banana, Chuckle’s is no laughing matter. This place is sad, but has tinges of a family bar. Deadbeat dads come here to rekindle friendships with their fucked up families. Drug addict mothers show up to sing Bette Midler Karaoke. Styleless wiggers bring their underage girlfriends here to drink. Chuckles does have a mobile meal cart that my associate and I spotted at Liberty Park during the Edgar Winter show. Offering corn dogs, potato ribbons and many other fried feasts, this encased snack unit, which I dubbed the “Chuck Wagon” will hopefully be making many more appearances at local Erie events. I was pretty gooned up when we stopped here, so I don’t remember too much else. They had a pinball machine that was older and more beat up than Cher’s labia.