In case you’ve been living under some fat chick with three cats recently, I’ll have you know that K-Mart, that shitty dirt department store known for their blue-light specials, severe price gouging and exceptionally filthy floors, offers without a doubt, THE BEST early A.M. breakfast deal that you’re gonna find at a place that filed for bankruptcy four years ago.  Now you might be saying to yourself, or to the bloody fetus lying next to you, “Dude, what the hell are you talking about? Is this another one of your fantasy fables like when you saw the skunk fish or when you drop-kicked that guy at the Old Country Buffet to get the last BBQ rib?”

Dude…all documented, all true. Me and my associate had to check this shit out for ourselves. The following report was conducted without the consent of K-Mart, the K-cafe, K-hop or it’s employees. 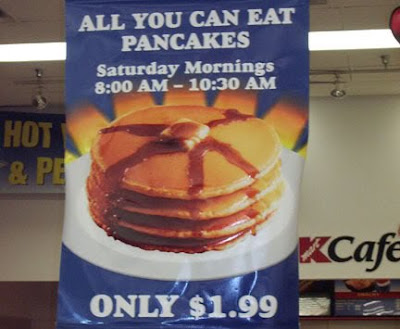 Ahhh…here we are! 8:00 A.M. on a Saturday morning. Have you ever seen the dirtfucks that go to K-Mart at this hour. We briefly met the morning manager, who had an agonizing resemblance to Robert Goulet. There ahead of us it stood. A blazing blue banner of breakfast. We’ve been looking forward to this for at least 10 hours and fruition was upon us. Talk is cheap and so are loose women, it was time to eat!

We entered the K-cafe and looked around. Quieter that zitty-chested teenager when he beats off at his parents house, not an employeee or patron was in sight. My Associate wanted a coffee so he went behind the counter and started rummaging around. Then, out of nowhere, a figure appeared, lengendary to the world of $1.99 breakfasts…was it…no way dude…maybe it…holy shit…it IS her…Pancake Patty!

The legend of Pancake Patty is one of tragedy and redemption. Born in 1925 (the same year Quaker Oats bought out Aunt Jemima) in Athens, Ohio, her older sister Gerdie taught her how to cook. She quickly became one of the most promising young short order cooks in the midwest. In 1970 while giving an outdoor culinary demonstation at Kent State University, Patty slipped on a serrated spoon and broke her left arm. Her sister Gertie was right by her side to dispatch immediate medical attention. Top doctors were flown in from other places, but the damage was too deep, she would never ladle another griddlecake again.

After the accident, Pancake Patty found herself on skid row. She became addicted to weird drugs and fucked random dudes all the time. In 1988 she finally got her shit together and secured a job at K-Mart. Still burning with the desire to make circular breakfasts, she applied for an opening as AM cook at the Erie, PA branch. The manager (that Robert Goulet guy we saw) was hesitant, but out of the kindness of his heart, he gave her a try and the rest is hotcake history.

Anyway, we gave Patty our order and before you could put on a pair of Rustler jeans, she brought out a short stack for each of us…oooh yeah! 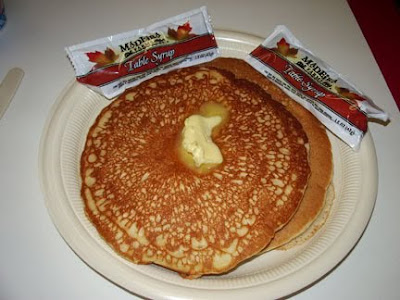 My Associate didn’t care about his high cholesterol or sagging waistline, all he could think about was the deliciousness. I was able to consume four less-than-fantastic flapjacks, each about the size of Roseanne Barr’s nipple. My Associate threw in his fork after three. It was a noble effort and a mediocre idea at best.